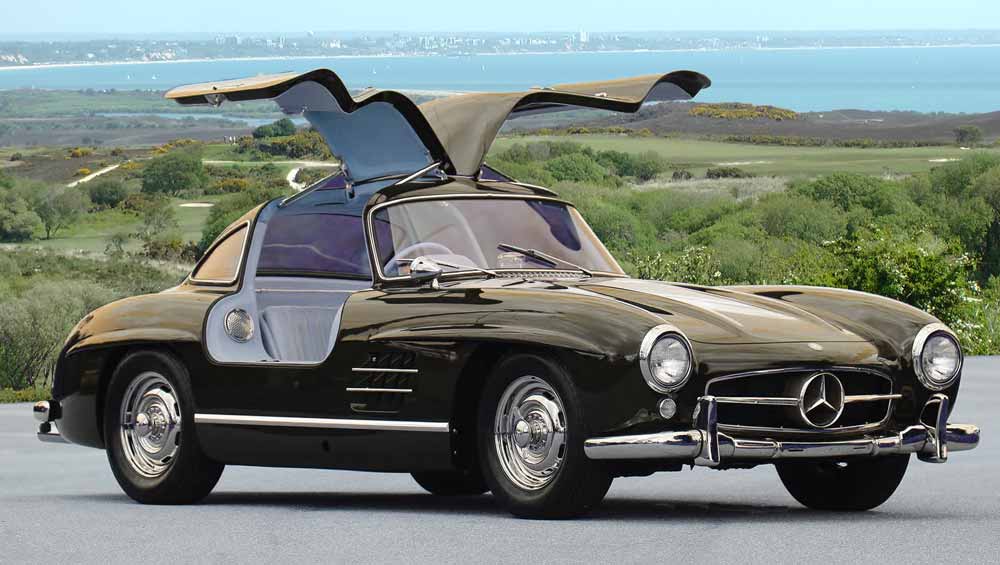 Back in 1952 Mercedes-Benz had a very successful racing car, the W149, which featured a revolutionary fuel injection system which injected petrol straight into the combustion chamber rather than into the inlet manifold. This boosted power considerably and the car had a top speed of up to 163 mph, making it the fastest production car of it's day. the 300 SL, a gull winged coupe with a three litre straight six cylinder engine, was based on this car, and it was an instant success.

This was despite the fact that mass production of the 300 SL was never really intended by the board! The market however decided otherwise.

Gull winged doors, however, can be a bit of a problem. Mechanically they can have maintenance problems, and they can be difficult to open in tight parking spaces and particularly in garages. American car importer Max Hoffman loved the look of the 300 SL but believed that some alterations would be necessary to make it attractive to the USA market. A very persuasive man, he convinced Mercedes-Benz that they should make these necessary alterations and create a roadster. he was right; when it was launched it created a buying storm!

The same engine was kept. This had to be tilted slightly so that it could fit under the bonnet. There was extensive work necessary however to re-engineer the bodywork from coupe to convertible. Conventional doors were fitted and the lower chassis was stiffened further with additional tubing. All of this work created extra weight, which had an adverse effect on performance and so engine alterations were carried out to squeeze an extra 20 brake horsepower out. Handling was improved with a rear low pivot axle. Bumpers and headlights were enlarged in order to comply with American legislation and the windscreen was redesigned with more curvature.

The result was that the car was able to sell at about three times the going price for a saloon car in the United States! sales of nearly 2700 were achieved.

By 1999 the 300 SL was a motoring icon; reckoned by many to be the finest sports car of the century; with or without gull winged doors! Perhaps more importantly the reputation that Mercedes-Benz had of being just a manufacturer of fairly boring, albeit big and luxurious, cars was gone for ever and they were generally recognised as a company capable of producing exciting sports cars with the very latest technological advances.