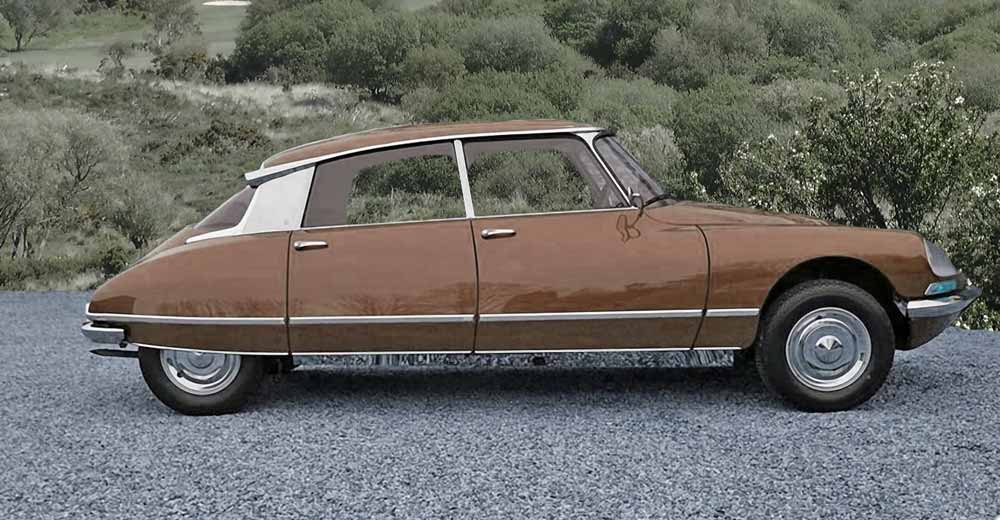 Citroen had always been a very innovative company. As far back as 1934 their Traction Avant had been the world's first front wheel drive, monocoque car, a standard which is now nearly universal for family cars; but which then was revolutionary; and after World War II the 2CV became one of the bestselling cars ever, coping with just about everything from metalled roads to muddy fields. In the DS they excelled even their own high standards.

This was a car way ahead of it's time. Firstly it's aerodynamic style; it was designed mainly by two collaborators, a designer and sculptor named Flamino Bertoni and Andre Lefebvre, an aeronautical engineer. Together they created a body which many still believe to be the most beautiful ever created.

It featured a new hydraulically operated self-levelling suspension system, which allowed sharp steering while still keeping the car at a constant height on the road despite any load it may be carrying. This made for a very comfortable ride, even over poor road surfaces, which some people compared to floating on a magic carpet.

It was roomy and comfortable, with front wheel drive, and had power operated disc brakes to the front; the first time these had been fitted to a mass production car.

Steering was power assisted, the gearbox was semi automatic.

Thanks partly to the fact that Citroen was owned by tyre manufacturer Michelin, the DS was designed to take full advantage of the latest radial tyres, which gave it better roadholding and a longer tyre life.

When it was first launched at the 1955 Paris motor show it was an instant success, with around 12,000 orders placed the same day!

There had been doubts amongst the design team about the car's appearance; the first prototype was in fact called The Hippopotamus! It was a hippo that was destined to save the life of the President of France however.

General Charles de Gaulle was not a popular man in 1962, after he granted independence to Algeria. A number of attempts were made on his life by paramilitaries who believed that it should have stayed French. His car was ambushed by assassins with automatic weapons; and despite the fact that several of the tyres were blown out the car stayed level thanks to it's automatic suspension and his driver was able to keep it going until he was safely away. Any other car would almost certainly have crashed and history would have been different.

This original Citroen DS stayed in production for a full 20 years, during which time nearly one and a half million of them were sold. This is despite the fact that sales in the United States of America were fairly flat because American buyers expected fully automated gearboxes, whereas the only option in the DS was semiautomated. Well you can't please everyone.