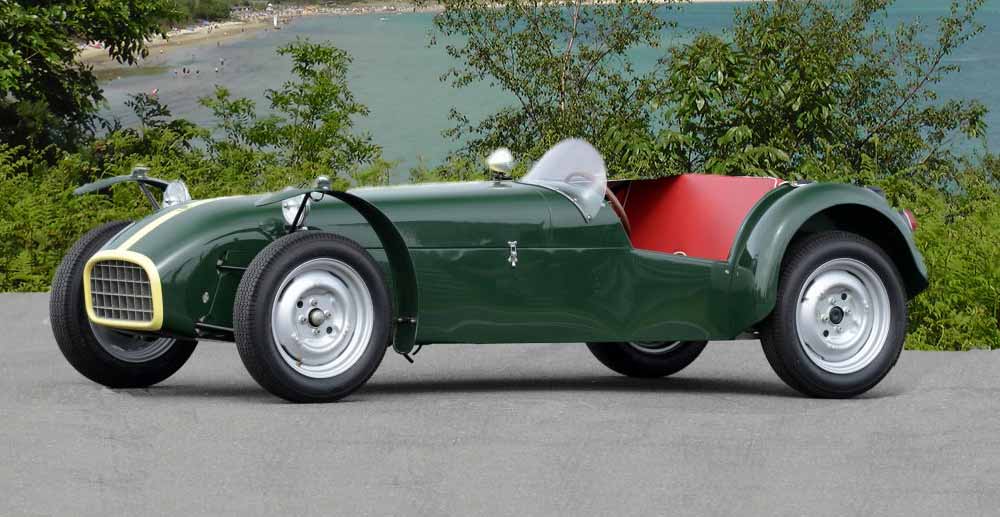 Back in the early 1950s many car manufacturers believed that the way to win races was to have the most powerful engine possible. This created one major problem however. A powerful engine meant a big engine, which meant that it would be heavy. A heavy engine needs a heavy car to carry it.

Colin Chapman, the founder of Lotus, took the opposite view. He favoured a small but efficient engine in a lightweight car. He designed and built racing cars with superb handling and he proved his maxim; that although a big heavy engine makes a car faster in a straight line, it has to go round corners too!

As a brilliant designer, engineer and inventor he started his business life creating racing and trials cars; racing was his first love and selling cars came second. The Mark V1 Lotus was the very first production sports car that he created.

As was common at the time, thanks to weird purchase tax regulations, many cars were sold in kit form at the time and this is the way that he operated. The Mark V1 was sold as a kit comprising the basic space frame chassis which weighed a mere 55 lbs and there was a Spartan light weight aluminium body. The rest of the mechanical parts were sourced from Ford, including many from the Prefect; these were tough, economical and easy to get hold of. The buyer could specify the engine although the recommended one was a 1200 cc side valve engine producing just 50 brake horsepower but the complete car was so light that it would still do 90 miles an hour with superb handling and cornering.

Buyers who wanted a little more poke could opt for other engines including the 1500 cc Ford engine from the Consul.

Yes the car was street legal but only just! There was a small windscreen but no other weather protection and with the car being so low down to the ground (a great advantage for cornering) driving in one was a truly exhilarating experience.

Most buyers of a Mark V1 wanted it for racing of course; with the added advantage of being able to drive it to and from the racetrack. Because of the capability of fitting different types of engine the car could be entered for different formulae and they became a regular sight at Britain's race meetings, gaining many successes even against much more powerful opposition, thanks to the superb handling and lowdown acceleration.

More than any other car that he made, the Mark V1 firmly established Colin Chapman as a manufacturer of exciting, fast, light weight, highly manoeuvrable cars.