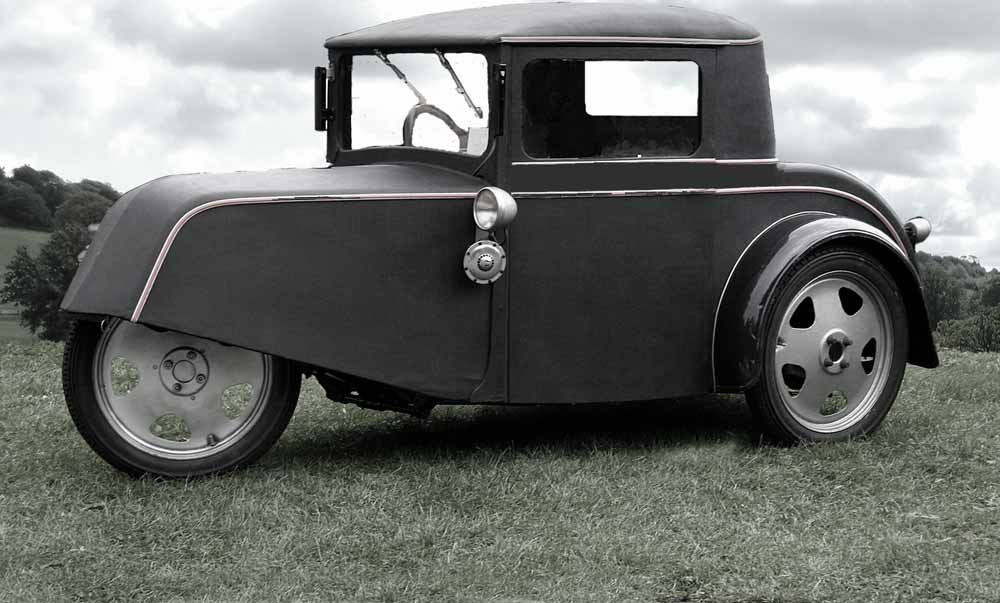 On the face of it it may sound bizarre. A tiny three wheeled vehicle, looking very much like an invalid carriage, clad in a synthetic material designed to look like leather. And yet it sold quite well in Germany during The Great Depression in the 1930s.

Following the First World War Germany's economy was in turmoil with inflation completely out of control and massive unemployment. Many Germans experienced severe poverty and the possibility of buying even the cheapest conventional car was beyond the hopes of the majority. A number of companies brought out micro cars which provided transport of a sort but most of them had little chance of achieving sufficient sales to make a profit. The Pioneer, built by an entrepreneur named Carl Borgward, survived, because it was better built than most, with a well thought out design, and although it could not be described as being beautiful it was at least better looking than some of the more Heath-Robinson offerings that were on sale at the time.

The specification was nothing to shout home about. It was a two seater vehicle with one wheel at the front and two at the back. there was a choice of single cylinder two-stroke engines; one of 200 cc and the other 250 cc. Power output was modest and a maximum speed of 37 mph was claimed. Acceleration? Hell would freeze over before it reached 60. The engine was mounted at the rear of the vehicle, driving the rear wheels through a three speed gearbox - a manual one of course. The driver and any passenger sat side-by-side and the vehicle was labelled a 'tricycle saloon'.

In order to keep both weight and costs down the frame was made of timber; and the bodywork was fashioned of nothing more substantial than artificial leather. There are no road reports to describe how it handled but it is certainly just as well that it was so low powered.

There was at least one logical reason for this design; lightweight vehicles like this could be driven without a drivers licence, and although an annual tax had to be paid by drivers of cars, these tricycles were exempt. As a result they were quite popular and between 1931 and 1934 more than 24,000 of them, from various manufacturers, were sold, Borgward being responsible for around 4000 of these. At his peak he employed approximately 300 people in the manufacture of the Pioneer.

Economic recovery spelt the end of these primitive vehicles however. by 1934 the end of the depression was starting to have an effect on general prosperity in Germany, and as part of an effort to boost the economy the government abolished car tax. Overnight this made the tricycle saloons far less appealing.

From 1934 onwards the company concentrated on four wheeled vehicles. Despite the fact that their factory was destroyed by bombing during the war the company managed to stagger on under a different name until 1961, when it finally went bankrupt.